TV Dinners is an exhibition that positions itself on the troublesome line which separates the online and offline realms.  It distances itself from a number of recent institutionally-driven exhibitions – such as ‘Changing Channels’ at Museum of Modern Art, Vienna (MUMOK) in 2010, ‘Are You Ready for TV?’ at The Barcelona Museum of Contemporary Art (MACBA) in 2010 – 2011 and ‘Remote Control’ at the Institute of Contemporary Art, London in 2012 – each of which surveyed the history of the use of television as a reference and a mode by artists, with little or no concern for the flourishing relationship between television and the internet.
TV Dinners will present recent works by young British and Australian artists and art collectives whose practices are shaped by this relationship.  Episodes originally broadcast live from the Frieze 2011 Art Fair and produced specifically for the internet by LuckyPDF will be featured, as well as a new digital video by Soda_Jerk, which reworks an iconic film clip for a Bob Dylan sound track with the titles of popular internet memes.  PsychoanalYSL have replaced the space within the exhibition for the presentation of their work with media space.  On their behalf, a curatorial co-conspirator has sold this media space to brands operating in Australia for the advertisement of their products and services.  Documentary footage of a performance by Eddie Peake which incorporates projections of the artist’s old home video footage will also be featured.
These works will be animated in the gallery spaces of BUS Projects through the replication of the home living environment.  Visitors will be encouraged to sit back and relax on couches and even order and eat takeaway food.  Within this setting, the artists’ and art collectives’ elaborations on the creative force of nostalgia and its influence on contemporary culture will come to the fore.


A MEMORIAL TO
_Dareen D Fluke_

At this sad time, we invite you not to mourn a loss but to commemorate a life lived. Leave your partners and children at home and join our loose art chicks in a class-A celebration of the high life.

Wallow not in this cathedral of shit but rejoice in a glorious legacy, with an exhibition “inspired by” the recently departed Michael Bauer, Juliette Blightman, Carter, Steve Claydon, Alastair MacKinven and David Noonan.

NB: This is an artist-led not-for-profit event, in that none of the artists will receive any proceeds from the exhibition. 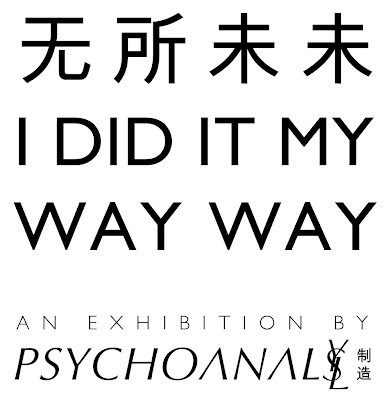 
Preceded by an event from 15:00 with
psychoanalYSL FREE SCHOOL

London/Berlin-based artist/DJ collective psychoanalYSL specialise in the disorientation of popular entertainment. For their first solo exhibition in China at Ceiling Space (in association with 501 Contemporary Art Centre and China and Chinese Art Centre, UK) the artists respond to the wrong-footed boycotting of Chinese cultural exchange in their home country and the way in which Chinese contemporary art is curated in the UK as novel political curio. Their presentation includes a mute-sensory installation and a series of quixotic prints.


The collective (Christopher Thomas, Benjamin Orlow and Joey Holder) make artworks which stockpile clichés. Their London exhibition The Emaciated Spectator at Apiary (London) earlier this year was immediately identified as urgent to current conversations concerning the professionalisation of art. Their hyperreal vision of the scene in London is now being exported to China, enveloping the Chinese art world in their own ideological smoke screen.
Spotlighting how activism has been co-opted, monetized and amalgamated by the marketplace, psychoanalYSL were fascinated by the festival of protest which followed the detention of Ai Weiwei. The artists planned to exhibit an artwork which responded to the market’s dependence on political cache in Chinese contemporary art; however the project faced two levels of censorship from both their hosts in China and supporters of the project in the UK. This exhibition reverberates these prohibitions.


The curatorial approach to Chinese contemporary art in the West can been associated with a wider phenomenon of “the collapsing distinction between marketing and activism” outlined by Micah White and others. Ai Weiwei’s sunflower seeds at Tate Modern provided not only mass entertainment but a satisfying moral soup. For their exhibition at Ceiling Space the collective utilise these surface observations to build a critical spectacle of the spirit of these international cultural relations. The artist’s process of observation and presentation studies and reflects capital’s operation that with one breath gives and another takes away the possibilities for art.


As Sontag purports “practically all metaphors for style amount to placing matter on the inside, style on the outside. It would be more to the point to reverse the metaphor. The matter, the subject, is on the outside; the style is on the Inside” (On Style, 1965). With this is mind, psychoanalYSL allows the matter to reveal itself by embodying and reflecting the preferred appearance for Chinese contemporary art in the West. The collective announce the conviviality of the apparently radical thematic in art; it is not that the politics is not present, but rather that simple resistance might be futile in our ‘Age of Complicity’ and maybe there is no easy oppositional solution. 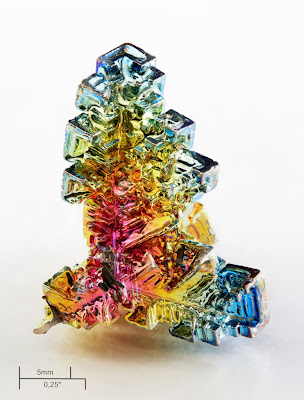 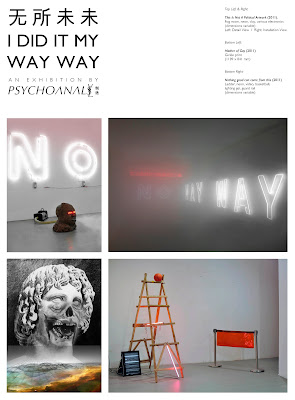 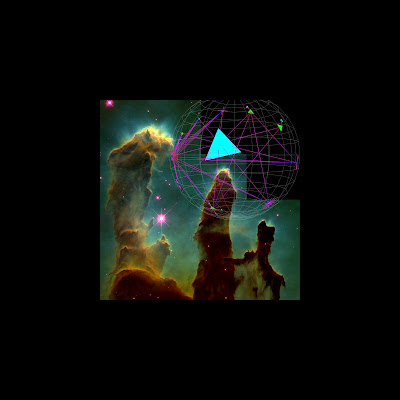 Exhibition: 3rd February – 12th March 2011
12 to 5pm, Thursday to Saturday
“The object of aesthetic apprehension is characterised as that
which is neither an object of knowledge nor an object of desire.”
- Jacques Rancière
Camp X-Ray, Guantánamo Bay Naval Base, Cuba, February 3rd 2002; a brightly-lit room: hazy infinity seems to stretch in every direction as a slowly pulsating monotone bass sound fills the air, occasionally building to the exalted crescendo of a distorted choir. A mangy rodent at the far end of the room, with red laser eyes throbbing in its head, is just visible through the fog. It stops dead in its tracks and turns to fix its gaze before declaring:
“This is a very popular artwork.” 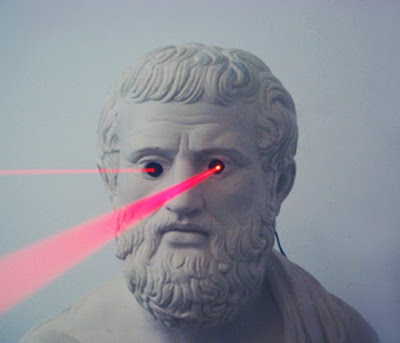 Following a talk on the political economy of art by PsychoanalYSL artist Christopher Thomas, critic Peter Suchin and writer Ben Seymour will discuss the idea of contemporary art as a smokescreen.
___________
Apiary Projects presents....

Friday 1st April
Artists’ performances and DJs until 4am.
Free entry before 11pm.

Performing live from 7pm:
psychoanalYSL
Romvelope
The Coolness
Invisible Acts of Power
oMMM
I am a Vowel
Mandelbrot
DEATH TO THE KING
Jonnie Mugwump (Exotic Pylon)
Nothing Works 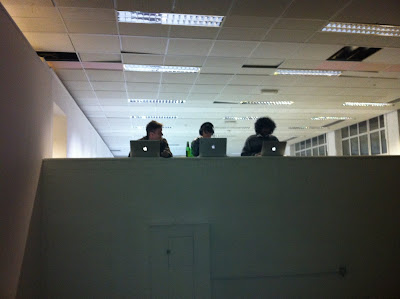